Now let me explain this to you. This was not your typical nonsensical dream, where I just happened to date Taylor Swift in between flying through the air and accidentally showing up naked to school. No. This dream was vivid and realistic. In fact, this dream followed a very coherent plot. Simply put, this dream was epic.

Allow me to give you just a high-level summary of this dream, so you can understand the epic-ness that I was dealing with:

I feel like this dream is turning into a Nicholas Spark’s novel. I hope I don’t die at the end.

And upon waking up here were my exact thoughts:

But even before I had the time to be impressed with my brains ability to manufacture the script to a terrible date movie while I was sleeping, my brain decide to have a third thought:

Well apparently not because here was my fourth thought:

My brain was legitimately pissed at me! And I know it was only one dream, but can you really blame my brain? That dream spanned years. Somehow, I tricked my brain into thinking it had been dating Taylor Swift for over four years. Plus, there’s the whole blimp thing. Even in a dream I can imagine that’s not an investment one makes lightly. That’s a serious commitment!

So after what was essentially four years of my brain being told that Taylor Swift is my soul mate, only to have that ripped away in an instant, my brain is pissed at me. And I’ve gone through the entire day with my brain resenting me because I’m not dating Taylor Swift. It’s the most bizarre form of self-loathing I’ve ever experienced.

But let’s get to the real question here. Um, why Taylor Swift? I’ve never had a crush on Taylor Swift. (My celebrity crush – in case you’re curious – is Charlize Theron, but I’d settle for Jennifer Aniston.) I mean, sure Taylor Swift is pretty, but I don’t know that she’s girlfriend material. But that apparently doesn’t matter to my brain who is convinced that I have lost the love of my life. Seriously. What the hell?

Now as it just so happens, my friend, Pyke, is a radio DJ (you may know him, he’s on XM) and he happened to have a surplus of these Taylor Swift t-shirts on hand. So this led to this:

While I may have lost her, I figure this way I can always keep her close to my heart.

Everything was fine and I was moving through my grief healthily until my wife saw that Facebook post. This put me in an interesting position. I either had to tell her about my dream, or pretend like I was a huge Taylor Swift fan. As a grown man, I’m not sure which is more embarrassing. Here’s how it went:

She was surprisingly supportive.

Another friend of mine tried a different tactic to cheer me up:

You’d think this would be comforting, but this only made things worse. Clearly our bond was beyond physical. That’s the strongest kind of love, probably.

So she tried something else:

I have to be honest, I feel like our love can withstand changing coastlines. In fact, that rebellious “to hell with not altering the coast lines” attitude just makes me want her more. What can I say, I guess I’m just attracted to naughty women.

But luckily, I can always rely on Kit to cheer me up: 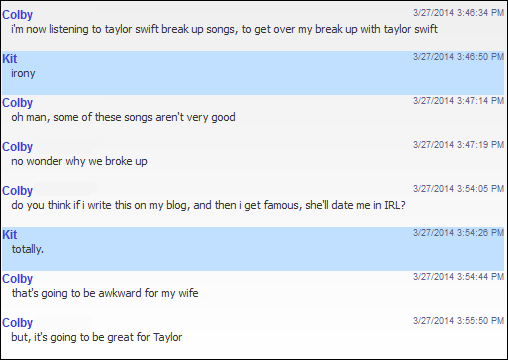 So there you have it. Spread the word, so I can start dating Taylor Swift. Together she and I will alter coast lines and live happily ever after. With my wife.

I Knew You Were Trouble. I have an oddly specific dream about Taylor Swift.
Tagged on: Dream    No Dale    Taylor Swift